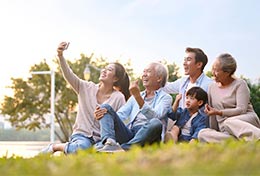 Occasionally, a person who has completed an estate plan with their lawyer may be surprised to discover a reference to Joseph P. Kennedy and his descendants buried deep within their trust document. Discovering in your very personal estate planning documents the name of someone with whom your family has absolutely no connection can be particularly puzzling, and even distressing. Undoubtedly, such a circumstance has led to concerned phone calls to the drafting attorney, demanding to know what on earth it means.

The Rule Against Perpetuities

The rule against perpetuities (RAP), a common trust provision often referred to as a “savings clause,” comes from a somewhat arcane rule that originated centuries ago in English trust law to prevent land-owning nobility from locking up their family wealth in trusts that could exist forever. A perpetuity has no end date.

The RAP grew out of case law and eventually became part of the statutory law in most states in some form or another. Traditionally, a common form of the rule was “[n]o interest is good unless it must vest, if at all, not later than twenty-one years after some life in being at the creation of the interest.”[1]

Although it may seem simple on the surface, the rule’s application can be fairly complicated and has resulted in plenty of controversy. One legal scholar has even referred to it as “a technicality-ridden legal nightmare” and a “dangerous instrumentality in the hands of most members of the bar.”[2]

A major problem with the RAP was that, traditionally, courts could completely invalidate a trust document that violated the rule, leaving default state laws (intestacy statutes) to determine the terms for passing property to the deceased owner’s heirs. Although many states have modified the rule to avoid invalidating the entire trust, it could still prevent certain beneficiaries from ultimately receiving their interest in the trust, frustrating the trustmaker’s intent. The RAP, therefore, could have disastrous consequences for some families. Thus, it became crucial to carefully draft trusts to avoid violating the RAP.

Drafting Language to Get Around the Rule

As creating trusts became common for individuals and families, estate-planning attorneys routinely used certain boilerplate (or standard legal language) in trust documents to circumvent the pitfalls that the RAP introduced. By naming an easily identifiable family with a large number of descendants (even if they likely have no relation or connection with the individual creating the trust), trust attorneys used the RAP’s language to designate the “some life in being” element of the rule, instead of using a life in being that was related to the trustmaker. The nature of Joseph P. Kennedy’s family, with their well-known tendency to have many children, made them a natural choice for a group of descendants from which the courts could identify “some life in being” to which the RAP could apply. By doing this, the argument goes, there was a much greater chance of identifying a very young life in being at the time of the interest’s creation, thereby maximizing the amount of time that an interest in the trust could vest in the trust’s named beneficiaries.

Some attorneys have used other easily identifiable groups of descendants such as those of Queen Victoria of England, the Rockefeller family of New York, and Brigham Young of Vermont, whose progeny is particularly extensive.

State Law Modifications to the RAP

In many states, the RAP is becoming less of a concern when drafting trusts. For example, Alaska has abolished the rule altogether[3] while Colorado and Utah have amended it to change the period of time from twenty-one years to 1,000 years.[4] Minimizing the RAP’s impact in modern estate planning appears to be a growing trend, and eventually, the rule may have no real-world impact in the United States. Nevertheless, because there remains a wide variety of approaches to this rule from state to state, trust documents continue to include RAP savings language to ensure that the trust, or an interest in the trust, does not become invalid because the trustmaker or beneficiary relocates to a different state.

Why Does It Matter?

Even though the RAP is becoming less relevant today in many states, it is still important to understand why your trust documents contain certain language. Americans continue to be very mobile, often living in multiple states over their lifetimes. Including carefully crafted language such as the RAP savings clause in your trust could have a real impact on your ability to craft a trust that accomplishes your estate planning goals and keeps your wealth in the hands of your descendants and beneficiaries. While these arcane rules can be confusing at times, more often than not, they exist for a specific purpose and continue to have significant real-life consequences. By working with an experienced estate-planning attorney, you can ensure that your goals are met and not frustrated by surprising rules such as the RAP. If you have additional questions about the RAP or other provisions in your trust, call us. You can rely on our experience to help you and your family reach your estate-planning goals.